Back in May, I thought I was losing my mind. I always feel like that, but it was serious this time, because I was hearing tiny “meows” in my head.

It was the weekend my mom and sister were in town to start planning my bridal shower. I was showing them around the barn and that’s when I heard it again! Faint meowing. I immediately asked if they’d heard it too, and they said yes.

Thank the lord I was sane.

We moved around a bunch of bales and finally found them-a litter of five kittens. 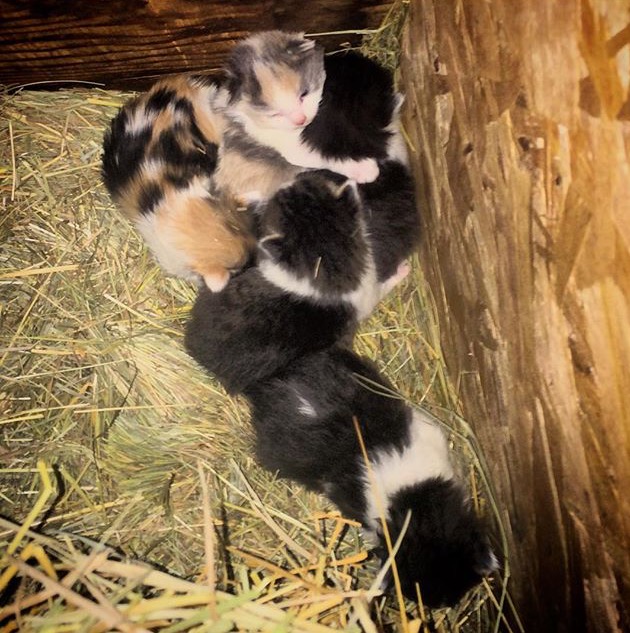 So darn cute. They all looked healthy so I left them alone, hoping their mom might take them elsewhere. I really didn’t need a herd of cats…

I checked on them then next day and they were gone. I was relieved but secretly kinda sad. But don’t worry…the story doesn’t end there.

Another TWO weeks go by, and I started hearing the “meows” again. I looked back at the original spot, but found no kittens. I stood there for a minute and then looked down and saw tiny little eyes staring up at me. There was one kitten left in the wall of the barn.

Just one. And ‘it’ was pretty messed up looking. 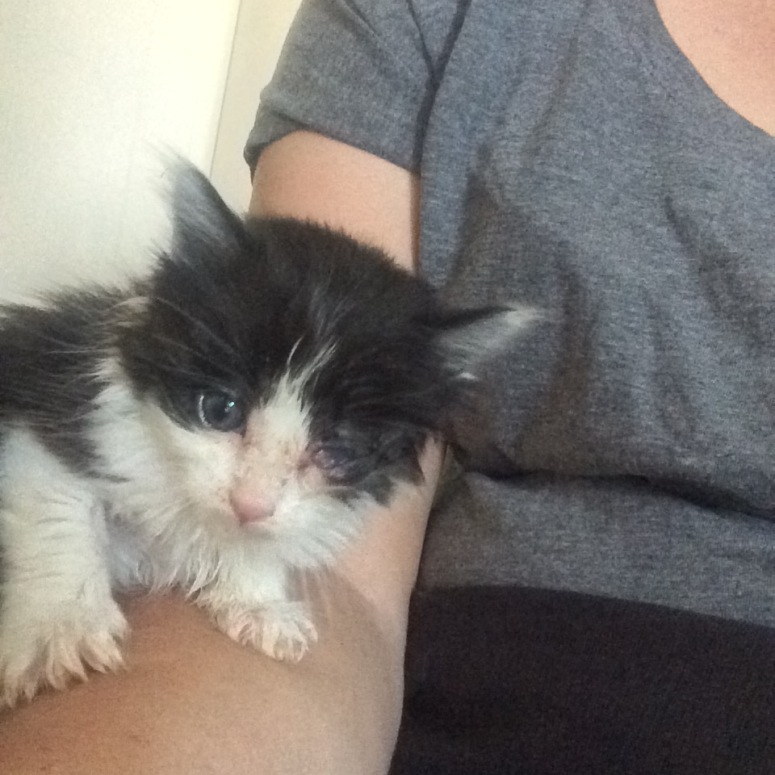 The little thing looked like it had NO EYEBALL. And it was so matted I had no idea what else was wrong with it.

His mom has to come back for it, I thought. The next morning I came back into the hay barn and heard it again. Mom did not come back. What a b*tch!

Obviously I couldn’t leave it there to die alone in the wall, starving. So I brought it inside and tried to wash it off in the tub with some medicated shampoo. I bought a little kennel and kept it there for a a few days, feeding him some warm milk, which he happily drank.

A few more days went by and I was getting worried about its eye. I had told myself I wasn’t going to take it to the vet because it was a feral cat and I know I couldn’t save every stray animal I found on my property.

Well the guilt overrode my conscience, and I ended up taking the mangly little thing to the vet.

At first glance, the vet looked at me like I was one of those little girls that would bring a half dead squirrel into her office in hopes of saving it.

I insisted that the kitten had shown signs of strength and alertness and had been eating consistently. The kitten was playful!

Apparently you cannot tell what gender a kitten is until they get a little older, so that question was left unanswered. Jakob and I just called it Ole One Eye.

Speaking of the eye, the vet was uncertain if the kitten would ever have vision in its left eye. The eyeball had receded into the socket and didn’t have any sunlight to help develop the retina. Well sh*t.

$156 dollars later, I walked out with eye ointment to be applied twice a day, antibiotics to be administered twice a day and also milk replacer to be fed three times a day. I was baptized into motherhood.

The next few weeks were a bit grueling (4:15 AM) but rewarding. Each day One Eye got a little better and the eye was starting to actually look like an eye. 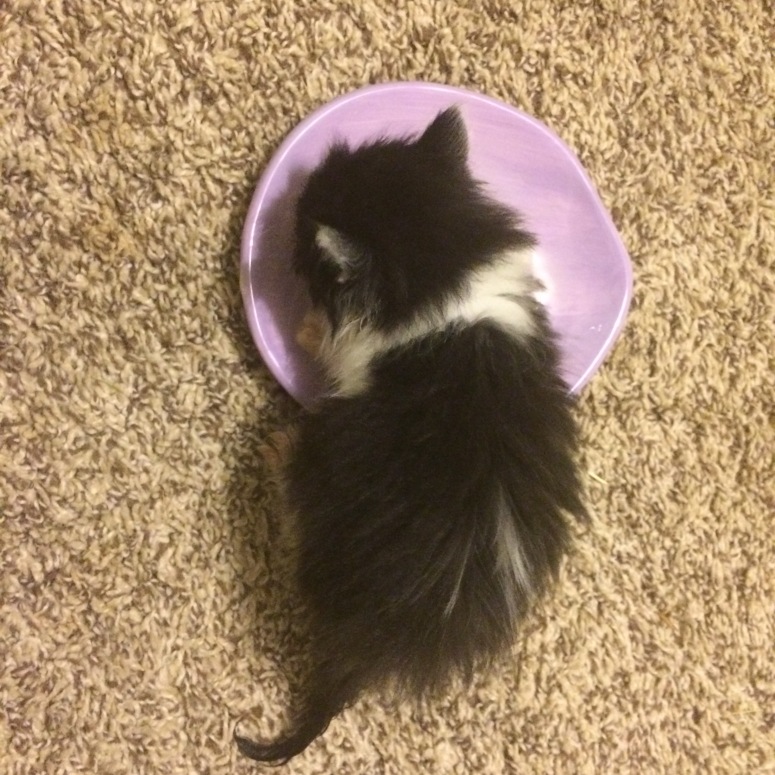 The kitten would follow us everywhere. It would come outside with the dogs and run around the yard. It is safe to say that this kitten thought it was a dog, and still does. 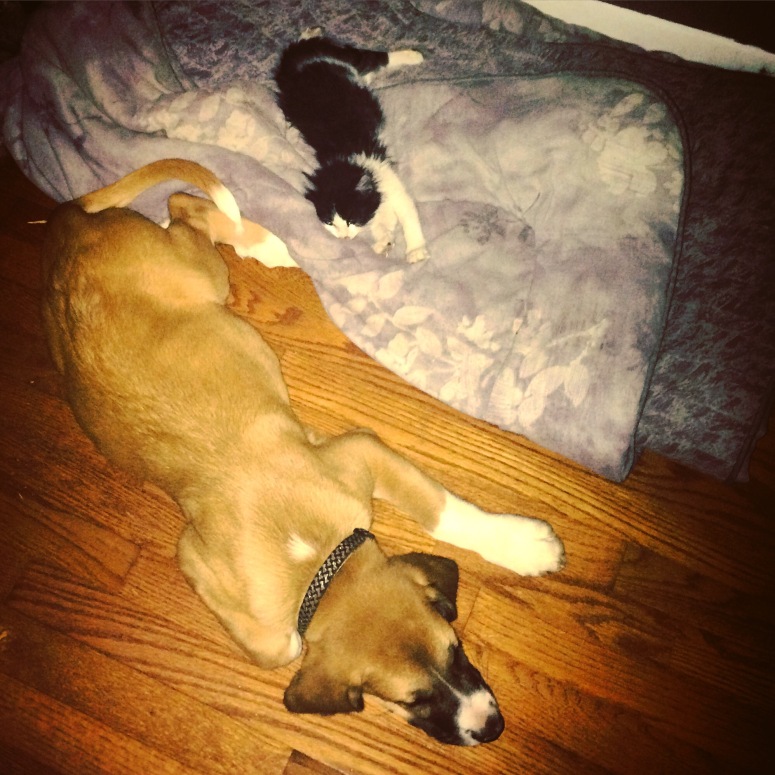 We actually just found out that the kitten is a male about three weeks ago. Who knew you had to wait that long to “know??”

Since we finally knew the gender, we gave him a more appropriate name instead of Ole One Eye and deemed his name Lucky. Fitting right? He was pretty lucky.

Except when he lost one of his toes…yeah there is that. He followed me out to the barn one evening and decided to slide between Harley’s (our horse) back legs. Harley did NOT like it..and struck the tip of his hoof at the kitty. I heard a loud cat screech (unmistakable) and saw Lucky run out of the barn. I picked him up and saw one of his little tiny toes still dangling off his paw. Not really much blood. Lucky acted like nothing had happened and starting purring once I picked him up…wtf??

I took him inside to Jakob and we doctored him up. He was completely fine in a week. My thought was and still is, how did Harley only chop off one, tiny little toe? You would think that one kick from a horse would be the end of a tiny little cat. Nope, he was just very lucky!

We planned on Lucky being a barn cat, you know the kind that live in the BARN. Well that never panned out because Lucky has learned to use the doggie door. He follows the dogs everywhere. He literally even wags his tail like a dog when he’s excited.

​​
Now that he is a house cat, he has turned into a psychotic creature. Except during his afternoon and evening naps with Jakob in the recliner. It’s only then when he calmly likes to be petted. Any other time he likes to suicide jump off of shelves onto your head, silently sit under the couch until your feet hit the ground and then bite your ankles, and eats pancakes off of the kitchen table when no one is looking. He is so spoiled that he has trained us to give him a slice of deli ham every time the fridge is opened.

His most recent obstruction of justice happened to take place in the barn. We hadn’t seen him for quite awhile which was unusual as he is always reeking havoc in the house. We walked out to the barn and saw him stuck in the rafters in the middle of the barn. The thing is, we couldn’t figure out how he even got up there unless he scaled the plywood wall or literally jumped five to six feet from the top of the tack room closet. That mystery will remain unsolved.

Anyways we got a ladder and rescued him, not before he bit and scratched my right arm completely off.

All said and done…he is a terror of sorts but he’s ours so we gotta love him. Feral cat abandoned by his evil mother turned king of the humans. 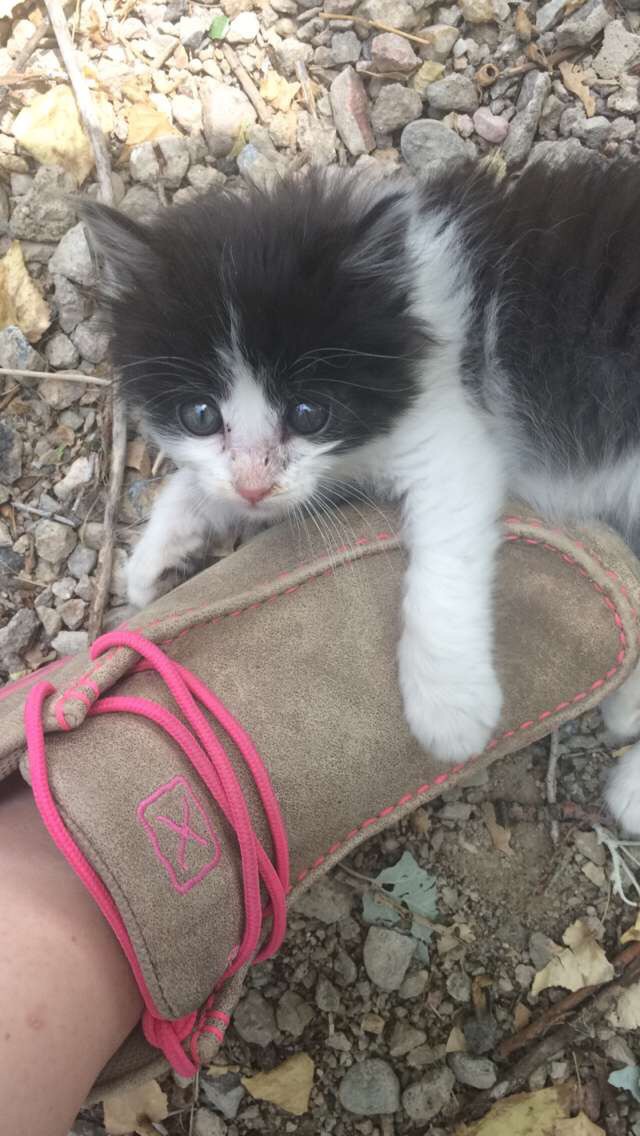 2 thoughts on “The Tale of Ole’ One Eye”